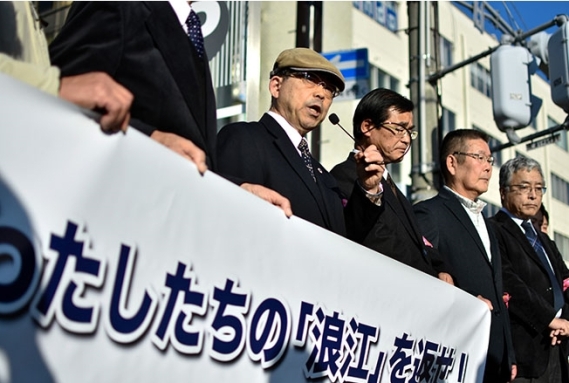 Plaintiffs in the lawsuit against TEPCO and the government gather in front of the Fukushima District Court in Fukushima on Nov 27.

FUKUSHIMA–Dismayed at a breakdown in talks for compensation, residents of the disaster-stricken town of Namie filed a lawsuit against Tokyo Electric Power Co. and the central government for damages stemming from the nuclear accident here in March 2011.
The plaintiffs are seeking 1.3 billion yen ($11.4 million) in financial redress.
The entire town was evacuated in the aftermath of a triple core meltdown at TEPCO’s Fukushima No. 1 nuclear power plant triggered by the Great East Japan Earthquake and ensuing tsunami.
The lawsuit was filed at the Fukushima District Court on Nov. 27 after five years of negotiations between the town and TEPCO collapsed in April over the utility’s refusal to meet demands for more compensation.
According to court papers, 109 plaintiffs of 49 households…