“Thank you very much for having me today, I’m Akiko Morimatsu.

I am very honoured to speak here in the Houses of Parliament in Westminster. It’s been eight years and this place is far from Japan, but people are thinking about us and I am really thankful to all the people who have given us this opportunity. And I will talk about what we lost, what suffering we’ve had and what suffering the whole of humankind had to suffer.

These are my children [applause]. Meiyo, 11 years old and Meia, 8 years old.

It’s been eight years since we evacuated. The only reason I evacuated in order to protect me and my children and it’s about our health and our lives. At that time my children were several months old and three years old.

Immediately after the disaster there were a lot of parents and children who wanted to evacuate and there are still many parents and children who want to stay away from the disaster struck area. However during the last eight years virtually no policy or institution has been established in order to protect our lives. On the other hand the Japanese government is trying to eliminate the public support [in order] to promote the return of the people to Fukushima and for this policy a huge amount of money has been spent meanwhile housing subsidies and public support to the evacuees has been cut.

We the residents of Fukushima have been exposed to unnecessary radiation exposure. First the nuclear power plant exploded and that contaminated the air and the [radioactive] plume fell to the ground and that spread into the ground water and the water goes into the ocean and in that sense, just as Ian visualized, the Fukushima Daiichi disaster contaminated the whole Earth.

My personal experience was that at that time my daughter was only several months old and I had to drink the contaminated water and I had to breastfeed my daughter [2][3]. And my daughter didn’t have the choice to say “no.” She didn’t even have any notion of avoiding radiation exposure, she couldn’t understand that kind of notion. But my daughter and those other children were forced to be contaminated because of the actions of their parents.

I’d like to talk about why I decided to evacuate. Before the disaster I already knew that in 1945 atomic bombs were dropped on Hiroshima and Nagasaki and from that I knew the word “Hibakusha.” Hibakusha means a person who has suffered radiation exposure. And because I knew that word I felt I had to leave this place.

This is the most important message I have from Fukushima, that it is not only the right of Japanese people but of people all over the world.

I believe that we can’t live with nuclear.  We have learned a lot of lessons from Hiroshima and Nagasaki and we as Fukushima victims we need to continue to witness, we have the responsibility to tell the suffering to people and to the next generation.

“My name is Akiko Morimatsu. I’m here with other evacuees and mothers together with Greenpeace. I evacuated from the Fukushima disaster with my two children in May 2011. Shortly after the accident radiation contamination spread. We were repeatedly, unnecessarily exposed to unannounced radiation. The air, water and soil became severely contaminated. I had no choice but to drink the contaminated water and to breastfeed my baby. To enjoy health, free from radiation exposure is a fundamental principle. The Japanese constitution states “we recognize that all peoples of the world have the right to live in peace free from fear and want. However the Japanese government has implemented almost no policies to protect its citizens. Furthermore the government is focusing on a policy to force people to return to highly contaminated areas. I call on the Japanese government to immediately fully adopt and implement the recommendations of the UN Human Rights Council. I thank the UN member states for defending the rights of residents in Japan. Please help us protect people in Fukushima and East Japan, especially vulnerablechildren from further radiation exposure. Thank you.”

[2] The government did not warn the residents of Koriyama that their tap water might be contaminated with radioactivity from Fukushima Daiichi nuclear power plant; some Koriyama residents only became suspicious that it might be when the government advised residents of further away Tokyo to avoid feeding their infants and babies with tap water due to contamination. Tokyo lies some 230km away from Fukushima Daiichi nuclear power plant while Koriyama lies only some 60km away.

[3] Radioactivity can concentrate in breast milk: “The Transfer of Drugs and Other Chemicals Into Human Milk,” page 75, table 3:

And: “Drug Entry Into Human Milk”:

* the most common radioactive elements in the fallout from Fukushima Daiichi nuclear power plant have molecular weights of less than 300 e.g Iodine-131, Cesium-134/137, Strontium-90, Plutonium-239, Uranium-235 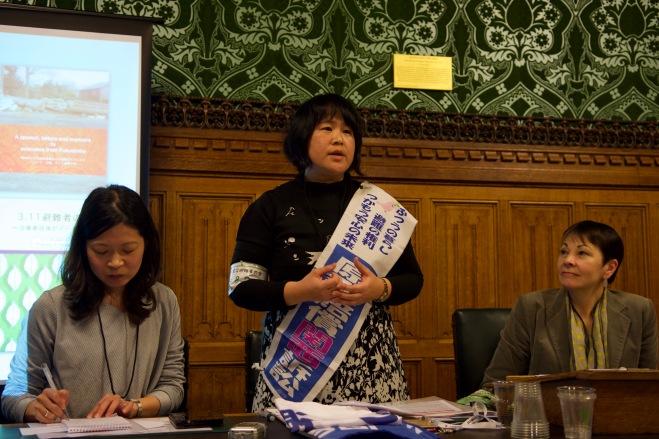 Like Loading...
“The right to live free from radiation exposure is one of the fundamental human rights.” Akiko Morimatsu addresses Parliamentary public meeting, House of Commons, London, 19 March 2019